Three-time Olympic gold medalist Jeremy Wariner will make his Victoria International Track Classic debut Sunday, June 19 at Centennial Stadium. Wariner has never raced in Victoria before but sees the event as an opportunity to strengthen his chances of making his fourth Olympics.

Wariner, 32, has been dominating the 400 metre event since his days at Baylor University. The McKinney, Texas, native’s personal best time of 43.45 is the third fastest time in 400 metre history. He won Olympic gold medals in the 400 metres and 4×400 metre relay in Athens in 2004, as well as another gold medal in the relay event in Beijing in 2008. He competed in the 2012 Olympics in London but was forced to pull out due to injury. 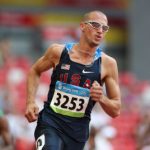 “My athletic career changed dramatically (after 2004),” said Wariner. “I had to start training even harder than I ever had. I had a large target on my back and had to make sure every time I stepped on the track I was in top shape.”

Warner is closer to the end of his career than the beginning but sees 2016 as chance to make his fourth, and perhaps final, Olympics. Despite all his accolades and career earnings, his love for the sport has been tough to give up.

“This is something I do because I love to run,” said Wariner. “I am blessed to have been able to travel the world doing something that I love. It is awesome to have so many young athletes look up to me as a role model.”

With his career winding down, Wariner admits he tries to live in the moment and enjoy every race.

“Beyond 2016 is hard to see at this moment,” said Wariner. “I’m just focused on each day in front of me. I will look at 2017 once this season is completely over with.”